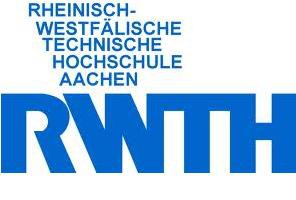 From Wikipedia, the free encyclopedia

RWTH Aachen University [4] is a research university of technology (comparable to an institute of technology in the American system) located in Aachen, North Rhine-Westphalia, Germany with roughly 35,000 students enrolled in 126 study programs.[5]

In 2007, in the line of the excellence initiative, RWTH Aachen was chosen by DFG as one of nine German Universities of Excellence for its future concept RWTH 2020: Meeting Global Challenges and additionally won funding for one graduate school and three clusters of excellence.[12]

In 2012, RWTH Aachen was selected again as a University of Excellence and altogether financially endowed for one graduate school and two clusters of excellence. RWTH Aachen is one of only six German universities which retain their status as Universities of Excellence from the previous funding period of 2007 – 2012.[13]

RWTH Aachen is a founding member of IDEA League,[14] a strategic alliance of five leading universities of technology in Europe. The university is also a member of TU9,[15] DFG (Deutsche Forschungsgemeinschaft)[16] and the Top Industrial Managers for Europe[17] network.

On 25 January 1858, prince Frederic William of Prussia, the later German emperor, was presented a donation of 5,000 talers for charity, raised by the Aachener und Münchener Feuer-Versicherungs-Gesellschaft, the precursor of the AachenMünchener insurance company. In March, the prince chose to use the donation to found the first Prussian institute of technology somewhere in the Rhine province. The seat of the institution remained undecided over years; while the prince initially favored Koblenz, the cities of Aachen, Bonn,Cologne and Düsseldorf also applied, with Aachen and Cologne being the main competitors. Aachen finally won with a financing concept backed by the insurance company and local banks.[18] Groundbreaking for the new Polytechnikum took place on 15 May 1865 and lectures started amidst the Franco-Prussian War on 10 October 1870 with 223 studentsand 32 teachers. Its primary purpose was to educate engineers, especially for the mining industry in the Ruhr area; there were schools of chemistry, electrical and mechanical engineering as well as an introductory general school that taught mathematics and natural sciences and few social sciences. The first years were characterized by the unclear position of the new Prussian polytechnika (which officially were no universities). Their reputation in society was low and the number of students decreased. This began to change in 1880 when the early RWTH, amongst others, was reorganized as a Royal Technical University, gained a seat in the Prussian House of Lords and was finally granted the right to bestow PhD (1898) degrees and Diplom titles (introduced in 1902). The same year, over 800 male students had been enrolled; the first women were admitted in 1909. World War I, however, was a serious setback for the university. Many students voluntarily joined and died in the war and parts of the university were shortly occupied or confiscated.

While the (then no more royal) TH Aachen flourished in the 1920s with the introduction of the more independent faculties, several new institutes and the general students’ committee, first signs of nationalist radicalization were also visible within the university. TheThird Reich‘s Gleichschaltung of the TH in 1933 was met with relatively low resistance from both students and faculty. Beginning in September 1933, Jewish and (alleged) Communist professors (and from 1937 on also students) were systematically persecuted and excluded from the university. Vacant Chairs were increasingly given to NSDAP party members or sympathizers.[19] The freedom of research and teaching was severely limited and institutes important for the regime’s plans were systematically established, existing chairs promoted. Shortly closed in 1939, the TH continued courses in 1940, although with a low number of students. On 21 October 1944, when Aachen capitulated, more than 70% of all buildings of the university were destroyed or heavily damaged.

After World War II, the university recovered and expanded quickly. In the 1950s, many professors who had been removed because of their alleged affiliation with the Nazi party were allowed to return and a multitude of new institutes were founded. By the late 1960s, the TH had 10,000 students, placing it on top of all German technical universities. With the foundation of a philosophical and a medical faculty in 1965 and 1966, respectively, the university became a bit more “universal”. It was especially the newly-founded faculties that began attracting new students, and the number of students almost doubled twice from 1970 (10,000) to 1980 (more than 25,000) and from 1980 to 1990 (more than 37,000). Today, the average number of students is around 30,000, with exactly one third of all students being women in the winter term of 2007/2008. By relative terms, the most popular study programs are mechanical engineering (23.6%), medicine (9%), electrical engineering (8.8%), computer science (7.1%), economics (5.1%) and architecture (5%).

In December 2006, RWTH Aachen and the Sultanate of Oman signed an agreement to establish a private German University of Technologyin Muscat. Professors from Aachen aided at developing the curricula for the currently five study programs and scientific staff took over some of the first courses.[20]

In 2007, RWTH Aachen was chosen as one of nine German Universities of Excellence for its future concept RWTH 2020: Meeting Global Challenges, earning it the connotation of being an elite university. However, although the list of universities honored for their future concepts mostly consists of large and already respected institutions, the Federal Ministry of Education and Research claimed that the initiative was aimed at promoting universities with a dedicated future concept so they could continue researching on an international level.[21] Having won funds in all three lines of funding, the process brought RWTH Aachen University an additional total funding of € 180 million from 2007-2011. The other two lines of funding were graduate schools, where the Aachen Institute for Advanced Study in Computational Engineering Sciencereceived funding and so-called “clusters of excellence”, where RWTH Aachen managed to win funding for the three clusters Ultra High-Speed Mobile Information and Communication (UMIC), Integrative Production Technology for High-wage Countries and Tailor-Made Fuels from Biomass (TMFB).[22]

The RWTH is not a campus university. Instead, its buildings are spread over some parts of the city. There are two core areas (midtown and Melaten district), though they are not very distinct. The Main Building and the Kármán Hall are 500 m away from the city centre with the Aachen Cathedral, the Audimax (biggest lecture hall) and the main refectory are 200 m farther. Other points of interest include the university’s botanical garden (Botanischer Garten Aachen).

The RWTH has external facilities in Jülich and Essen and owns, together with the University of Stuttgart, a house in Kleinwalsertal in the Austrian Alps.

Main Building of the RWTH Aachen

The university is currently expanding in the city center and Melaten district. The SuperC, the new central service building for students, was opened in 2008. The groundbreaking for the new Campus-Melaten was in 2009.

Double degrees and student mobility are promoted with other technology universities through the TIME (Top Industrial Managers for Europe) network. Furthermore the RWTH is member of the IDEA League, which is a strategic partnership among five of Europe’s leading research universities, including TU Delft, Imperial College London, ETH Zürich and ParisTech [23] and was the first German university starting anUndergraduate Research Opportunities Program in 2008.

Compared to other German universities the RWTH Aachen received the highest amount of funds granted by third-party donors in the last years.[24]

Almost 5,200 international students are currently enrolled within the undergraduate, graduate or PhD programme. Compared to other German universities the portion of international students at the RWTH Aachen is higher-than-average.[25] The proximity of Aachen to the Netherlands, Belgium, and Luxembourg combined with the subsequent exposure to a variety of cultural heritages has placed RWTH Aachen University in a unique position with regards to the reflection and promotion of international aspects and intensive interaction with other universities.

In 2011 QS World University Rankings[28] ranked the university 140th in the world. Its global subject rankings were: 35th in Engineering & IT, 330th in Life Sciences & Biomedicine, and 82nd in Natural Sciences. The RWTH is divided into nine (previously ten) faculties:

Faculty nine was pedagogical sciences, but it was abandoned in 1989. Teacher education, however, continued.[30] The university cooperates with the Fraunhofer-Institutes situated in the Melaten district of Aachen. The institutes offer workshops, courses and lectures for the students of RWTH Aachen.

The Jülich-Aachen Research Alliance (JARA) was founded by the RWTH Aachen and Forschungszentrum Jülich in 2007.[31] Four sections are coordinated by the research facilities:

RWTH Aachen University plans a fundamental enlargement and restructuring of its campus for the close future. The new campus areas shall provide space for clusters of research institutions and industry partners to offer a better integration of research and technology. Approximately 10,000 new jobs are prospected to be created. Current plans state that construction activities shall begin in 2009. The total investment is roughly € 2 billion.[39]

RWTH Aachen University has educated several notable individuals, including some Nobel laureates in physics and chemistry. The scientists and alumni of the RWTH Aachen played a major role in chemistry, medicine, electrical, and mechanical engineering. For example, Nobel laureate Peter Debye received a degree in electrical engineering from RWTH Aachen and is known for the Debye model and Debye relaxation. Another example, Helmut Zahn and his team of the Institute for Textile Chemistry were the first who synthesisedInsulin in 1963 and they were nominated for Nobel Prize.