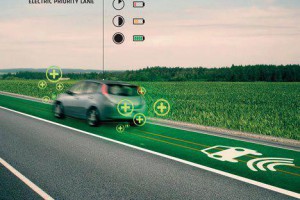 Glow-in-the-dark roads and responsive street lamps were among the concepts to make highways safer while saving money and energy presented by Dutch designer Daan Roosegaarde at the Design Indaba conference in Cape Town earlier this month. The Smart Highways project by Studio Roosegaarde proposes five energy-efficient concepts that will be tested on a stretch of highway in the Brabant province of the Netherlands from the middle of this year. The first of the concepts developed by studio head Daan Roosegaarde and infrastructure firm Heijmans is a glow-in-the-dark road that uses photo-luminescent paint to mark out traffic lanes. The paint absorbs energy from sunlight during the day the lights the road at night for up to 10 hours. Temperature-responsive road paint would show images of snowflakes when the temperature drops below zero, warning drivers to take care on icy roads. There are two ideas for roadside lighting: interactive street lamps that come on as vehicles approach then dim as they pass by, thereby saving energy when there is no traffic, and “wind lights” that use energy generated by pinwheels as drafts of air from passing vehicles cause them to spin round. Finally, an induction priority lane would incorporate induction coils under the tarmac to recharge electric cars as they drive. Roosegaarde presented the Smart Highways concept at the Design Indaba conference in South Africa earlier this month, where he received a standing ovation from rapt guests.