Welcome to Germany – Get to know German Culture- etiquettes!! 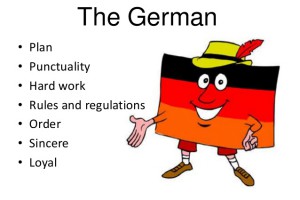 Germans value order, privacy and punctuality. They are thrifty, hard working and industrious. Germans respect perfectionism in all areas of business and private life. In Germany, there is a sense of community and social conscience and strong desire for belonging. To admit inadequacy — even in jest — is incomprehensible.

Leave a comment Featured, German Culture, german etiquettes, how to behave in germany