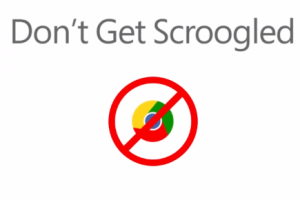 A leaked internal video from Microsoft depicts Google as a surveillance company that is only interested in sucking up personal data from its customers in order to sell advertising.

The rise of the Internet has brought a new generation of Big Brothers to the fore, with Amazon, Facebook and Google now representing the establishment, while Microsoft’s fledgling Bing search engine and other web services trying hard to play catch-up.

The allegedly leaked video focuses on Google’s Chrome browser, which comprises over half the browser market in 2013 while Microsoft’s once-ubiquitous Internet Explorer languishes at less than 12 per cent. Spoofing Google’s bouncing ball ads, the Microsoft version is set to the ominous tones of Beethoven’s fifth. “With Google Chrome, everything everywhere is tracked … to target you with ads,” reads the text.

Microsoft’s self-interest shouldn’t obscure the dangers of handing over all our information to only a handful of companies. Google, in particular, has created an enormous empire based on monetizing its users’ browsing habits, and as much of 97 per cent of its revenues come from targeted advertising.