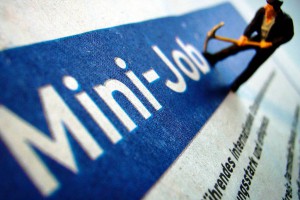 Questions and answers about mini-jobs

The benefits of the pension benefit

The minimum threshold for mini-jobbers increases from 1 January 2013 from 400 to 450 euros. At the same mini-jobbers enjoy future with relatively low individual contributions of the full protection of the state pension scheme. The German pension insurance answers key questions about the new rules for minor employment.

What is the current law?

Under the current law, it is just the opposite: mini-jobbers are charged in addition to the lump-sum contribution of the employer from the current 15 percent do not own posts. But you can increase the employer’s contribution to volunteer for the full pension coverage. The mini-jobbers purchase will be entitled to the full package of services the state pension scheme.

What is the contribution to the pension scheme?

From 2013 mini-jobbers to pay lump-sum pension contribution of 15 percent of the employer itself a contribution to the generally lies at 3.9 percent. With a monthly salary of 450 Euro’s own contribution is 17.55 euros per month.

What will the payment of own contributions to security in the event of reduced earning capacity?

Example : Jasper K., medical student working while studying eight hours a week in a supermarket and earns 300 euros a month. In the third work week he gets involved on the way to his mini-job in a serious car accident. He suffered permanent physical disabilities and is then partially incapacitated. Since this is a work accident (commuting accidents) and is Jasper K. by his Minijob mandatory contributions to statutory pension insurance pays, he can receive a pension for partial disability.

Can the mini-jobbers by paying their own contributions also earn the right to medical rehabilitation?

Yes. Mini-jobbers can through the payment of own contribution entitled to a medical rehabilitation if at least six months of employment contribution from the last two years before a rehab can be credited application.

Example: Claudia Z. has graduated from high school in the summer, but have not received admission. Now she works part in 450-euro basis in a coffee shop. Claudia Z. suffered from asthma as a child. She has since worked in the cafe, the asthma attacks have increased, it is more and more sick. In the spring it is a rehabilitation application for pension insurance and gets a rehab in a hospital that specializes in lung diseases. Therehab stabilized their asthma and leads to significantly improved coping with the disease.

Can mini-jobbers after the revision also entitled to vocational rehabilitation purchase?

Even for a professional rehabilitation of the pension, as for retraining in a new occupation, certain conditions must be met. They are larger than those in the medical rehabilitation . You have to have a rule 15 years of creditable contribution periods. This includes activities as mini-jobbers, if the contribution is paid.

Example: Thomas S. has trained as a retail salesman worked for almost ten years in a specialty store for computers. He then went freelance. Since he did not have the desired effect, and because of a chronic spinal suffering increasing problems had to work his business closed again. In an electronics store, he took up a mini job. His spinal disorders but deteriorated in such a way that after a few months he could only work sitting down.Of the pension he was eventually offered a retraining as an office administrator and financed. This was possible only because he. Bother with the times from the mini-job in which he has paid contributions made ​​to the 15 years came to contribution periods

Can you uppers with the new mini job well?

Insurance with a mini-job belongs to you immediately eligible persons. With low incomes may have to pay an annual own contribution of 60 euros suffice in a Riester contract to get the full state subsidy. Especially low-income earners and families with children benefit from this support. The full basic state allowance for anyone is 154 euros and 185 euros for children per year. For children who were born in 2008, even 300 euros per year to supplement flow.

Example : Miriam W., mother of two daughters who were born in 2008 earned, in their mini-job 450 euro per month, over the year so expect 5,400 euros. To get the full state subsidy, it must be assumed four percent in a certified Riester contract deposit.Of the 216 euros would have to pay them, so the basic allowance of 154 euros and the child allowance for the two daughters of 300 euros (600 euros) are deducted.Geringverdienerin as they must ensure that only a base amount of 60 euros in pay (= 5 euros a month) to get 754 Euro annually on government allowances for their Riester contract.

Can mini-jobbers under the new rules also make provisions operationally?

With a mini-job insurance can mini-jobbers untaxed contributions to their pension funds, and pay social charges directly from the gross salary. However, this reduces the claim to the state pension scheme.

What makes the mini-job for later retirement?

How can I be exempted from the pension insurance?

Mini-jobbers can with their employer at any time can be freed with a written request from compulsory insurance. The employer then pays only its fixed contribution to the pension scheme.

Mini-jobbers can make the exemption from the pension insurance look back?

If mini-jobbers can exempt from compulsory insurance, is binding until the end of the employment relationship.

Who is affected by the new rules?

The new rule applies only to new mini-jobs, which as of 1 Be commenced January 2013. For existing minijobs see next question and answer.

Does the pension obligation for existing mini-jobs?

Those who continue to work in an existing insurance free mini job is exempt from compulsory insurance in the future. Mini-jobbers can in this case, but how far do without the insurance of freedom for the full pension coverage. Increases the employer from 1 January 2013, however, the monthly income of more than 400 euros, then the insurance free mini job is automatically insured. With an income up to 450 euros, he can apply for exemption from compulsory insurance again.

What changes in the so-called midi-jobs?

Which advises the pension?

Before mini-jobbers be exempted from the payment of own contribution, they should find out what impact this has on their social security. The waiver of the compulsory insurance for mini jobs may lead some to the fact that an already purchased protection in case of disability or disappears again promoting their mini-jobbers no longer receive Riester pension.